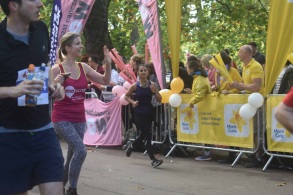 I am not a runner. I repeat, I am not a runner! But I ran the Royal Parks Half Marathon in 2:16 with just 7 weeks training.  I struggled to run to begin with for 10 minutes and it took me weeks to get past 5km! Infact, I read a blogging entry recently that reminded me that at the 3 week before mark, I was still running just 5km! During those 7 weeks of training I was at a music festival, away on holiday and other life issues that often meant my training was a little ropey.  I didn’t follow training programs, and I trained soley in the gym.  Some mistakes here on reflection, but this was precisely the course of events. Some elements of crazy going on, much learning and much joy!

Do you see the photo of me and the blonde girl with our Mencap t-shirts on? Meet Becca! This opportunity arose through her, as spare spaces were available to run for the charity, and I feel I have so much to thank her for. I recall the day I messaged her asking if places were still available, checking my diary to see how much time I had, and then telling her “I’m crazy, but I’m in!” Crazy yes- determined, yes! 13.1 miles, or just over 20km of crazy 🙂

It was a beautiful day. Honestly, in London or indeed in England, goodness knows what you might contend with really at anytime of year. This day was perfect! I left my house with nerves, excitement and adrenalin. I think I had run 15-16km before the race, so there was still the unknown of how I would fare the entire distance. I entered the entrance site in Hyde Park alone, thousands of people waiting to run, to check their bags in, with families, loved ones and friends. I think I would have been too nervous to have gone with anyone to be honest. Ruben was away in Spain (I called him immediately after, I was so thrilled with myself!) and a friend met me for a gorgeous roast and celebratory hug not long after I had crossed the finish line and to see a special friend there waiting for you was also epic. The morning itself was crisp, bright, and there was a buzzing almost of a brilliant anticipation as we prepared ourselves in our individual ways. For me, that was to mentally psyche myself up. This was my first proper run- I have completed maybe 1-2 5km runs a few years ago. Fun runs, no or little training. This was now the big one!

I ran the first 10km in 50 minutes. That came as a surprise to me! And I hurt quicker than anticipated, but also felt overcome with happiness running along the Strand. It hurt more on concrete though, and the “game plan” I had in my head of how to manage my stamina went promptly out the window. I felt I stopped quite frequently, and I’ll be honest, the last 5km (the ones not trained for!) were hell. But one of the loveliest feelings about a day like this is the sense of camaraderie. I had two guys running behind me in St James Park, who, having seen the name on my vest kept on with “C’mon Clare, you can’t stop now- you’ve nearly made it!” Their smiles, humour and enthusiasm made all the difference, to me as a stranger to them and made me pick myself up, when I was low on energy and desperate to stop.  My loved ones had been slightly worried that I had bitten off more than I could chew, which I understood. I came to the finish line, after all those hard times not being able to run for 10 minutes as I said, and felt I had achieved something magnificent. My body and I had made it!

And in that knowledge, of what my body can do and could be even more capable of, the Royal Parks Half Marathon has been something of a life changer. I ran the race on the basis that I like challenges! I had enjoyed running as a child and never pursued it. If you tell me I can’t do something, I’m more than likely to think “game on” 🙂  And to run around my favourite city in the world was a dream!

Roll on the ballot on the 30th January 2018 as my friend Alice and I are going to enter again for October 2018. If you are considering it- it is TOTALLY worth it. To run through such beautiful parks, past the landmarks we all know, and to feel at one with it all (even in the pain!) is just unbelievable.

Thank you for getting me started Becca!